For such a tiny organ, the thyroid gets a lot of attention.

This makes sense when you consider just how vital its task is: this gland helps to control the body’s metabolism. Metabolism is the sum-total chemical processes that occur within the body to maintain life – and importantly governs how fast or slow we burn the calories from food and how efficiently we produce energy.

Every cell in the body depends on thyroid hormones for metabolic regulation.

Your thyroid is a small gland, normally weighing about 25g and around 5 x 3 x 2 cm in size, located in the front of the neck. It is made up of two halves, called lobes, that lie along the windpipe and are joined together by a narrow band of thyroid tissue, known as the isthmus. It produces two types of thyroid hormone –Triiodothyronine (T3) and Thyroxine (T4). 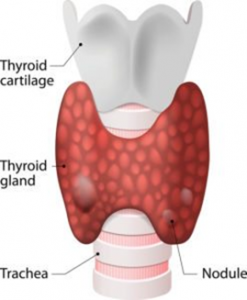 Each molecule of T4 and T3 is made of the amino acid tyrosine and iodine. T4 contains 4 molecules of iodide and T3 contains 3 molecules of iodide – hence the names T4 & T3. T4 is produced by the thyroid gland in much greater amounts than T3, around 90% more. When T4 reaches organs and tissues, it’s converted into T3 which is the active form of thyroid hormone that exerts a metabolic effect inside your cells. 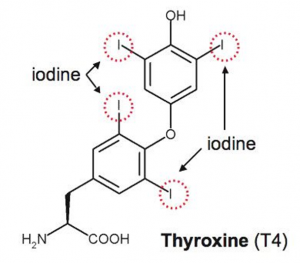 The levels of thyroid hormone in your body are regulated by a complex feedback loop involving the hypothalamus and pituitary glands which detect the levels of thyroid and related stimulating hormones in the body and adjust accordingly. A simple analogy to help understand how this works is that the thyroid hormone is like heat – the pituitary is the thermostat that switches off when the heat gets too high – and the hypothalamus is like the person who controls the heater itself. Of course, thyroid physiology is far more complicated than this, but for our purpose it is enough to understand that there are numerous steps involved.

There are several problems that can occur with the thyroid gland. Autoimmune disease is an immune system issue where body interprets the thyroid gland as a threat and produces antibodies that target thyroid cells and destroy it. The prevalence of thyroid autoimmune disease is increasing in Australia. Broadly, these disorders include Graves’ Disease which results in an over-active or hyperthyroid gland, and Hashimoto’s Disease which causes an underactive or hypothyroid gland. Underactive thyroid affects mostly women, and is the most common type of thyroid disorder.

A third possible situation is known as sub-clinical hypothyroid. This is when blood tests appear normal, but symptoms of underactive thyroid are present, and this may be attributed to the thyroid hormone not being active enough at the tissue level.

Signs your thyroid gland may be unhappy include:

Comprehensive assessment for thyroid issues may include some or all the following:

T4 is converted to the active form T3 in the tissues by an enzyme called iodothyronine deiodinase. Deiodinases are selenium-containing enzymes, thus dietary selenium is essential for T3 production. Deficiency of deiodinase activity can mimic hypothyroidism attributed to iodine deficiency. Zinc also assists in the conversion of T4 to T3, and cellular sensitivity to thyroid hormone is enhanced by vitamin E.

The reason many women develop hypothyroidism during the peri- and menopausal stages is because they have lower progesterone, a vital hormone that activates an important enzyme responsible for thyroid function. Maintaining healthy oestrogen/progesterone balance is also important because oestrogen dominance causes the liver to produce higher levels of a protein called thyroid binding globulin which decreases the amount of thyroid hormone that can be utilised by cells.

Interestingly, after constructing this table I was happy to discover it had unintentionally pulled together most of the Mediterranean diet elements. No surprise that an eating pattern associated with longevity and the lowest rates of chronic disease is also going to be a great choice for supporting optimal hormonal balance.

Depression is not an uncommon experience among those with underactive thyroid, so worth mentioning here also the recent Smiles Trial findings.

es Trial involved 67 men and women with moderate to severe depression eating a relatively unhealthy diet. Half the participants consumed a modified Mediterranean diet and attended dietary support sessions. After 12 weeks, the diet group saw depression scores improve on average by about 11 points, and 32% percent had a scores so low that they no longer met the criteria for depression. People in the unhealthy diet group by compare improved by about 4 depression score points and only 8% achieved remission.

About 20% of our thyroid hormone T3 sulphate and T3 acetic acid, must be converted to active T3 by our gut bacteria. Consequently, if significant gut issues are present i.e. lack of the beneficial bacteria that perform this role then potentially one may be more likely to experience the hypothyroid state.

Gluten sensitivity has been linked to Hashimoto’s thyroid disease. Gluten is the protein found in wheat, rye, oats, and barley. Research shows that about 16% of people with coeliac disease (an autoimmune reaction to gluten) have antibodies that attack the thyroid too. Some studies have found eliminating gluten reduces these anti-thyroid antibodies, and other studies have found it doesn’t make a difference. It is likely some people are more sensitive than others, however if you are newly diagnosed it may be worth considering a strict 1-month gluten free diet trial.

Goitrogens are substances that disrupt the production of thyroid hormones, and include;

These are all nutritious foods that will not usually affect thyroid function in healthy people. However, in some sensitive people who already have low thyroid function eating too many of these foods can potentially make things worse. The aim is to trial a reduction in these foods if suspected to be playing a role – not to eliminate them altogether. Cooking the vegetables, rather than eating them raw helps to reduce the goitrogenic effect.

There is some evidence that excess halogens including fluorine, chlorine, or bromine can decrease iodine and inhibit thyroid function. 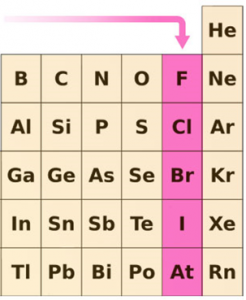 Certainly, some agriculture chemicals such as the organochlorine insecticides and fungicides are associated with an increased prevalence of hypothyroidism. Plasticisers including PCB’s & BPA which are found in some food containers and water bottles may have direct actions on the thyroid receptor too.

Iodine can be toxic if supplemented in large amounts – always obtain advice on dosage and prioritise meeting your nutritional needs through food sources.

Excessive radiation exposure can affect the thyroid gland so be sure to ask for a thyroid shield during radiology procedures.

Moderate exercise improves cellular sensitivity to thyroid hormone, and can also help manage some of the symptoms of hypothyroidism.

Disclaimer: Please note that as a dietitian I work primarily with food and occasionally with nutritional supplements as my primary strategy for improving wellness. The balance of the information in this article is based on my own research gleaned from credible sources and is intended as general information only, not personalised advice. This information provided takes a functional and integrative medicine perspective which includes a holistic (nutritional and environmental) approach to improving health and wellbeing, and mind-body medicine.